When will Aboriginal issues get on the radar of Winnipeg mayoral race? 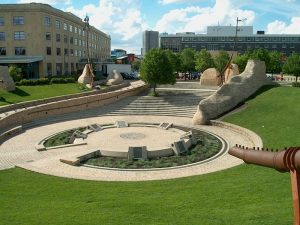 According to the most recent Census, the “census metropolitan area” of Winnipeg “had the largest Aboriginal population of any city in Canada in 2006” at 68,380 people. (Rounding out the top 3 cities are Edmonton at 52,100, and Vancouver at 40,310.)

That works out to 10 per cent of Winnipeg’s population. And a good chunk of that population — comprised of First Nations, Métis and Inuit individuals — is made up of fairly recent additions/arrivals:

A tenth of the population is no tiny pocket of people. Which makes me wonder: why has there seemingly been no discussion of Aboriginal issues in this city’s mayoral race so far?

An admittedly cursory look over the similarly cursory website for incumbent Sam Katz revealed no specific mention of Aboriginal people or how broader civic issues might specifically concern or affect them. An equally quick survey of his main challenger’s site, that of Judy Wasylycia-Leis, also came up dry in this regard.

The vote is 7 weeks away. That’s still a fair bit of campaign time left, but it’ll go by quickly, no doubt. Will Aboriginal issues be left by the wayside? Let’s keep our eyes and ears open for what, if anything, the two candidates put forth in the way of policy proposals that address the specific needs of Winnipeg’s Aboriginal population.

Meanwhile, why don’t we give Sam and Judy a hand? Whether you’re a Winnipegger or not, consider this your chance to lead the discussion on what kinds of policy and services any North American city with a large Aboriginal population should offer its First Nations/Métis/Inuit citizenry.

We eagerly await your comments.

POST-SCRIPT: Of course, there are other Winnipeg mayoral candidates and I am utterly guilty of leaving them off my radar. The other 4 people in the running for the mayor’s chair may be found at WinnipegElection.ca.

Looking over their sites, I found only one reference to Aboriginal people, in the Discussion section of candidate Avery Petrowski’s Facebook group ‘Avery for Mayor.’ It was under his platform plank ‘Law Enforcement,’ wherein he mentions the need for “Increasing public relations training to [police] officers. Especially with Aboriginal Issues.”

Lo and behold, the Winnipeg Free Press reported today that Wasylycia-Leis promised that, if elected, she

“would use city workers to mentor or train [120] at-risk people and ex-offenders to help the city re-pave back lanes, prune trees, board up derelict buildings [etc.] … She suggested Ottawa and Manitoba may help out through job-training programs for Aboriginal youths at risk of becoming involved in gangs.”

One factor obviously constraining any political promises are the jurisdictional limits placed on any Canadian city, i.e., limits on the kinds of laws they can enact and enforce. Consulting the City of Winnipeg Charter Act, we see that its “spheres of jurisdiction” or authority (listed in Part 5) include:


Thus far, crime — and therefore the capacity to deal with it via the police — seems to have emerged as the campaign’s number one issue. It certainly gains quick and easy traction with the media desperate for any angle of interest to audiences.


And as Aboriginal people know all too well, justice (including its application and administration) is a very real concern on both sides of the equation, whether we are victims of crime or offenders. My question is, have the factors that have led Aboriginal people to experience disproportionate rates of victimization/imprisonment been properly understood and identified by any of the mayoral candidates? If so, to what extent do their recommended policies improve the situation?

4 thoughts on “When will Aboriginal issues get on the radar of Winnipeg mayoral race?”