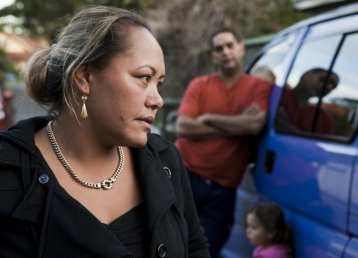 
An at-times harrowing documentary about one Aboriginal woman’s journey to physical, mental and emotional recovery after a vicious attack at the hands of her ex-partner. Interviews with family and friends and officials in the justice system round out this very personal struggle to stand up against domestic violence in Australia, which Lani’s experience suggests is still a stubbornly taboo topic among Indigenous communities.

Watching the doc, one gets the sense that telling the story of her life and her fight is meant to inspire other Aboriginal women like her to come forward without shame about that most contradictory of notions, “intimate violence.”

If I had to address any holes in the story, it would be the lack of data or larger context provided as to the prevalence of such abuse among Aboriginal people in Australia. In other words, how common or typical is Lani’s story?

Otherwise, the production values of this doc are excellent; the judicious use of re-creations and archival footage added colour and depth to the interviews. One added incentive to see the film is the fact that the subject of the story will be in attendance, a great opportunity to hear her epilogue in person.