Open Question: Could Tribes Face Fallout from Immigration Battles in the US? 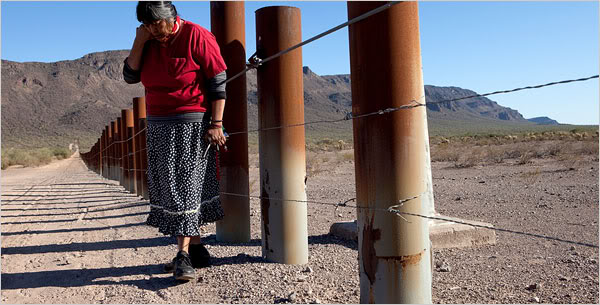 When it comes to “illegal immigration” debates in general, count me among the Aboriginal people who find the concept just a tad ironic in the case of the United States.

But last week, in what some call “the toughest crackdown on illegal immigration in the country,” the governor of Arizona — home to some 20 tribes and 250,000 Indians who, collectively, occupy one-quarter of the state — signed into law a bill (aka SB 1070) requiring local and state police to “question anyone they suspect of being undocumented,” writes Maureen Linke of the CNN Newsroom. It also “targets those who hire illegal immigrant day laborers or knowingly transport them.”

According to a Reuters report, the law (set to take effect in 90 days, or around late July/early August 2010) “has raised fears that Hispanic immigrants could be racially profiled.” The report goes on to say that the “majority of the 11 million people believed to be living illegally in the United States are immigrants from Mexico.”

Here are my open questions:

Q1: Have the Indigenous peoples of this region now called Arizona been caught in the fallout from the illegal immigration debate?

Q2: Are you worried that Indigenous peoples in Arizona will be adversely affected once the law is enforced by police?

Now, I am not at all conversant with the broader cultural history of this region, so I cannot speak with any authority as to what degree of commonality might exist between the Indigenous peoples on both sides of the imposed US/Mexico border. Accordingly, can people comment as to these possible parallels in terms of culture, ancestry, and socio-economic status and their potential for a kind of ‘illegalized Indian-ness’?

As for a more northerly perspective on such matters, I do know that Canada once forced Indians who went off-reserve to carry passes on their person at all times. (Scholars and critics now debate whether the policy was necessarily enforced all that rigorously, or was even all that effective, but the effort and intent was there all the same.)

Arizona is home to 21 federally recognized tribes. Together, the tribes contribute to the rich cultural diversity of Arizona.
The state is home to over 250,000 Native Americans (2000 Census). Reservations and tribal communities comprise over a quarter of
Arizona’s lands.
Share on Facebook Share
Share on TwitterTweet
Send email Mail
Share on LinkedIn Share

7 thoughts on “Open Question: Could Tribes Face Fallout from Immigration Battles in the US?”