What Impact Did the Oka Crisis Have On You? 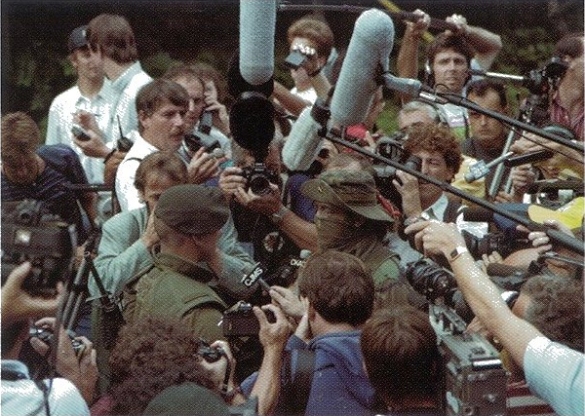 mediaINDIGENA‘s own Waubgeshig Rice has a stellar piece in today’s Facts & Arguments section of the Globe about the 1990 Oka Crisis. (Although I’m frankly baffled, to put it charitably, by the accompanying picture.) In “Oka helped us find our voice,” Waub nails it when he writes: “We learned what it truly meant to be Aboriginal in this country because of what happened at Oka.”

To me, the ‘real’ anniversary of note for Oka Kanehsatake was the moment when the army was called in (Aug. 8, 1990) at the request of the province of Quebec. A somewhat-sprightly 22 years old at the time, I remember being both terrified and galvanized by such an overwhelming and over-the-top martial response by Canada to the legitimate grievances of the Mohawks of Kahnesatake Kanehsatake, a historical turning point that forged my consciousness as to what it meant when Indigenous peoples truly stood up for their right to say what happens on their ancestral lands — and the price you can pay when you do.

And as Waubgeshig so eloquently describes in his short essay, events at Oka Kanehsatake “inspired a whole generation of young native people in this country to discover who exactly they were, and where they fit in on a national scale.” Clearly, I was far from alone in coming to consciousness through the events leading up to and surrounding the Oka Crisis — the spark that arguably ignited a new era in Aboriginal awareness and activism. And because I was just one of many affected by these events, it’s lead me to wonder: What impact did that eventful summer have on others, then and now? What, as you see it and feel it, has been the personal and political legacy of this momentous time in modern North American Indigenous history? How did the Oka Crisis inspire and influence your life?

As always, both Aboriginal and non-Aboriginal viewpoints are encouraged.

6 thoughts on “What Impact Did the Oka Crisis Have On You?”