The Politics of Skin Colour

Born and raised on the Okanese First Nation in Saskatchewan, Dawn Dumont is a Plains Cree comedian, author, playwright and actress. With works featured in the anthologies Native Women in the Arts, Gatherings, and the Rampage Literary Journal, Dawn published her first novel, Nobody Cries at Bingo, last year. 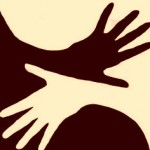 As you will soon figure out, the title of this essay is misleading. It probably sounds like it will resemble a graduate thesis of some earnest poli-sci major but in fact it will turn out to be little more than an outlet for my grouchy musings about how much people suck. But I digress.

My troubles all began when I went out with my younger sister on St. Paddy’s Day. She has the worst taste in men. I used to think I did too but if they gave out prizes for bad taste in men (other than STDs, that is), she would receive the Oscar, while I would be making do with a pat on the back from the director/soccer mom at a local community theatre.

My sister and I are Cree/Metis. Our parents possess different levels of melanin and, in the DNA washing machine, she came out brown with light hair and I came out dark haired with creamy beige skin (which would also be my stripper name if I could afford breast implants). Growing up, my immediate family assigned no value to skin colour. In fact, me and my other sisters often lamented our lack of colour and envied our baby sister’s colouring.

Now, on this particular adventure, my baby sister and I were hanging out with two Native dudes. I do not know where she met them; I suspect it begins with a Plenty and ends with a Fish. Let’s call them (’cause I didn’t bother to learn their real names) ‘Eric’ and ‘Jake.’ Eric has dark skin, dark hair and (sigh) frosted tips. Jake was a young man with light brown hair, lighter skin and a set of teeth that looked like they were trying to run away from his face. Seriously, his teeth were literally cascading out of his mouth like a waterfall. If you were on acid, looking at his face would make you trip the fuck out. Actually staring at his face long enough might make you feel like you were on acid.

I didn’t care for the company but my sister seemed into Eric (bad taste rears its ugly head again). I also stayed because I had a glass of green wine in front of me (the bartender made it especially for me: the highlight of my night).

After they asked us our ages yet again, my sister told Eric that she thought he might be East Indian the first time she saw him. He said he got that all the time. At this point, Snaggle-tooth interjected, “Yeah, he’s a black motherfucker!”

His friend smiled benignly. My sister laughed politely. I rolled my eyes and refocused my attention back to my cellphone where I was trying to post a picture of how much fun I was having to Facebook.

Toothface Jake interpreted our lacklustre responses as encouragement: “In my family, I am the whitest looking Native. That’s right, I gots the lightest skin in ma family. Yup, I am so white lookin’, it’s unreal!”

I quickly checked my watch to make sure that we hadn’t been transported back to the 1920s. I’m no stranger to internalized racism. I know it exists. I’m very familiar with Chris Rock’s infamous “Niggers vs. Black people” bit. But it’s still jarring to see it played out in front of you.

I wanted to point out to young Horse-mouth that his white skin didn’t make him better than us darkies. (Nor better looking, obviously.) But, feeling that Jake’s self-esteem was already in a fragile state (a sense I got merely by looking at him), I gently asked, “Did that make you feel different from your family?”

Jake replied that he was glad he wasn’t “born black like this loser,” pointing to his friend. Then he asked me again how old I was.

I was disappointed because this young Native man had swallowed the white-skin-good, dark-skin-bad Koolaid. Then I felt sad because there are so many things we need to fight for — getting an equal part of the economic pie, protecting our treaty rights, and improving education for our children — that we don’t have the time to be mired in self-hate.

I was about to bring up these points when Eric called the waitress a bitch because she was taking too long to bring him his green beer. It was then that I decided that an intelligent conversation about racial politics wasn’t going to happen with this crew, so I packed up my self-righteousness and retired to the dance floor where I shook my modest native booty as proudly and stoically as I could.

4 thoughts on “The Politics of Skin Colour”