Red in the Face over ‘Redface’ 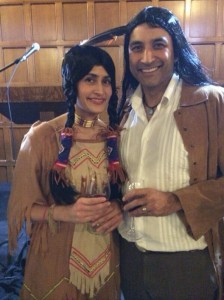 This weekend saw a number of events held to mark the 199th birthday of Canada’s first Prime Minister, Sir John A. Macdonald. At one such event, it seems guests were encouraged to dress up in period costume, circa mid-to-late 1800s, the era when ‘SirJAM’ intermittently served as PM.

[EDITOR’S NOTE: The costumed woman in this picture is NOT Niru Kumar: Ms. Kumar only took and shared a photograph of the woman and her similarly costumed acquaintance. We apologize unreservedly for the error. As is tradition on the Internet, we will strikethrough () the mistaken text but leave it in for accountability purposes.]

Among those costumed revelers, the pair of people you see pictured here, neither of whom are First Nations. The picture originally appeared on Twitter, but has since been taken down after [the photographer of] the woman in the picture faced an instant and sustained backlash, particularly from Indigenous people. In taking down the tweet, the [photographer] (Niru Kumar, who happens to be a member of the media and a lawyer in Toronto) also apologized. For some, it seemed, the move was too little, too late, but others apparently took it as a teachable moment.

In any case, the titter on Twitter was amazing to witness: and so, to try and capture some of the contours and dimensions of this uproar, I thought I’d pull together some of this reaction and consequent discussion in a Storify. See what you think.