2011 is just a month old and already the world is a changed place.

I refer to dramatic developments in two stories I looked at last year: the fight of Elouise Cobell, and the financial mismanagement trial of 5 men on the Grizzly Bear Head Mosquito First Nation.

Cobell, you’ll recall, is the Blackfeet warrior who pushed for 15 years to resolve the small matter of how her people got rooked out of billions of dollars earned from resources on their own lands.

Turns out, despite my moaning about how slow victory comes to those who wait rather than force it, Cobell won:

“Current estimates project that most Class Members will receive about $1,800, with some Class Members receiving much more depending on the level of activity in their [Individual Indian Money] accounts.”

Of course, the sum awarded is ridiculously inadequate recompense for the damage done — the lost faith, not to mention the lost interest on the claims over time.  But, by some measure, it symbolizes the ultimate victory of forcing your opponent to admit a wrong was committed.  And, as anyone who’s tried to win such an admission can attest, you just can’t put a dollar figure on that.

The other “revolution” I’d like to update you on has to do with the story of the men who mismanaged the land acquisition money of the Grizzly Bear Head Mosquito First Nation in Saskatchewan, an act that prompted one band member to declare in court: “We the band will never recover! Because of greed!”

In this sorry story, Alphonse Moosomin and Eldon Starchief, two of the five men charged, pleaded guilty and were taken away to jail for a year. The pair will also have to pay fines at the end of  it all. 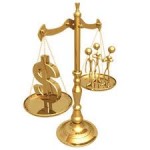 Unfortunately, the money they must turn in does not equal the money they took out.  But there seems to have been some recognition that they weren’t altogether malicious. They were simply following a well-worn path laid down by others rather than cutting the trail themselves, and therefore deserved a bit of understanding — at least in the court’s eyes. The remaining three defendants go to trial in May of this year.

So while all is not right with the world quite yet, it sort of feels like the sun shines on your face once in a while.