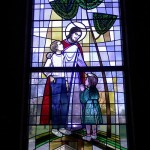 Recently, CBC Radio’s The Current interviewed some people about a proposed youth recreation centre in northend Winnipeg aimed at Aboriginal youth. What could be wrong with that, you ask? Well, the Youth for Christ group behind the proposal is a fundamentalist, evangelical Christian group that wants to convert youth over to its particular brand of religion.

This raises a number of issues. First, YFC’s going to use public money to do this. A lot of people feel that the City of Winnipeg, its Mayor Sam Katz and more than a few of its councillors are crossing a line by giving taxpayers’ money to one particular religious group whose aim is to convert or undermine those of other religions or beliefs. Not kosher, they say.

Second, opponents say the project is being rammed through without proper debate or a chance for people to express their concerns.

Third, and why this winds up on this page, there are a lot of Aboriginal people who are sick and tired of missionaries and fundamentalist types coming into their communities to take their children away from their own Indigenous spiritual beliefs, ceremonies and religions.

Take this letter that appeared in the Winnipeg Free Press for example:

We take great exception to the idea of providing millions of dollars in funding to a Christian evangelical organization led by individuals with no connection to the many organizations doing important work in the inner city. We do not reject the work that faith-based organizations are doing in our community. We work in collaboration with many such organizations. We are, however, very concerned with organizations like Youth for Christ because they have very explicit objectives to “Christianize” youth through their missions in the inner city. These objectives are clearly stated on their website. Of particular concern is a mission that includes “the aboriginal youth community as a prime area for development… “

Me? I just don’t like hypocrisy, like when people claim to be doing things for one reason but have other intentions in mind.