Co-Author of ‘Disrobing the Aboriginal Industry’ Pens Her Rebuttal 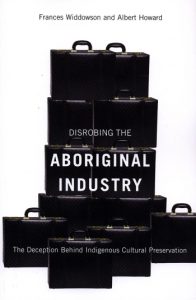 The following is a response to Niigonwedom Sinclair’s critical review of Disrobing the Aboriginal Industry: The Deception Behind Indigenous Cultural Preservation by one of its co-authors, Frances Widdowson.

I appreciate Niigonwedom Sinclair’s efforts in reviewing the book I co-wrote with Albert Howard.  Although I find most of Sinclair’s opposition to our work to be rooted in wishful thinking, and almost all the claims that he makes remain unsubstantiated, the opportunity to have this civil exchange is important: no one has a monopoly on the truth, and by honestly stating what we believe is true, and striving to objectively evaluate the evidence available, everyone can develop a more complete understanding of reality, including the nature of aboriginal/non-aboriginal relations.

Particularly refreshing is the fact that Sinclair does not engage in any personal attacks, or deploy the usual accusations of “racism,” “colonialism,” etc., to try to stifle debate on these issues.  The only label that he uses is “Eurocentric” — an orientation that could be defended, depending upon one’s view of the economic, political and intellectual advancements that have occurred in this region historically.  Sinclair’s major concern, as it should be, is about the accuracy of our work.  In his opinion, the theory of cultural evolution that we use has been “discredited,” our recommendations are “baffling,” and the claims made are “egregious.”

In his critique of our book, Sinclair encourages “Native Studies scholars” to

thoroughly interrogate and question … underlying claims, use reputable evidence to support [their] own, and always encourage honest and informed dialogues and debates among thinkers of diverse political and ideological opinions.

Although this sentiment is commendable, to what extent is Sinclair practicing what he preaches?  Has he “thoroughly interrogat[ed]” the argument that the theory of cultural evolution has been “discredited”? Although people like Taiaiake Alfred and Peter Kulchyski have said so, they have not really shown how this is the case.

The theory of cultural evolution has, in fact, been implicitly accepted in the discipline of archaeology, in the division of human history into the Stone, Bronze and Iron ages.  It is also generally understood that food production evolved out of hunting and gathering (what Morgan generally referred to as the stage of “savagery”), and industrialization was made possible by food production.  Therefore, what aspects of the theory is Sinclair contesting?

It also should be stressed that the theory of cultural evolution, and its conception of earlier developmental stages, does not just refer to “Native societies”: all human beings were, at one time in history, “’savage’, ‘neolithic,’ and ‘barbaric.’  Characterizing societies in this way is based on the technology present at the time, not on some kind of European “value” or a conception of particular cultures being “worthy or meritorious.”  Whether one values something or not depends upon its contribution to human survival.

In addition, it is not our view that aboriginal cultures are “static,” but that their capacity to “change, grow and adjust” is hindered by Aboriginal Industry initiatives that encourage the native population to look to the past for answers to current problems.  Respect for “tradition” is a mantra in aboriginal policy, and we are arguing that tradition should not just be accepted for its own sake, but on the basis that it can provide a social contribution.

In other words, we are opposing atavism in culture, not adaptation and integration.  Our point is not to deny that aboriginal cultures developed historically: rather, it is that, because of historical accident — namely, the absence of the necessary plants and animals in the Americas (wheat, for example), plus the north-south alignment of the continent — aboriginal cultures developed at a slower rate than what was possible in parts of the Old World.

If Sinclair is serious about using “reputable evidence” to support his claims, he should take a critical look at Charles C. Mann’s 1491: New Revelations of the Americas Before Columbus. Sinclair, like many aboriginal commentators, is enthralled with this work because it supports his preconceptions about the “sophistication” of pre-contact native tribes.

Advocates for atavism in aboriginal life disregard the hugely speculative content of Mann’s writings. Take, for example, one of Mann’s flights of imagination about life on the Mississippi in 1100 A.D.  In this account, we marvel at the “city” of Cahokia with its population of fifteen thousand people and

carefully located fields of maize; and hundreds of red-and-white plastered wood homes with high-peaked deeply thatched roofs like those on traditional Japanese farms.

What was the technology that allowed for such accommodation? We are informed that the maize was weeded with stone hoes, but how were the homes built without saws or nails? What about the red and white paint? His claims of these fantastic developments include that “Cahokia was a busy port,” even though the Stone Age technology present would only have been able to produce small boats limited in the distances they could travel (making a “busy port” unlikely in this context).

It should at least be recognized that Mann’s speculations with respect to Cahokia are exclusively based on the existence of large mounds of earth found at the confluence of the Missouri, Illinois and Mississippi rivers, the source of which is debated — either they were built (for no understandable reason) or they are natural formations.

One of the sources used to support this statement is Mann’s 1491.  But it is not clear, for example, that wampum can be “read,” as is claimed by many Native Studies scholars.  This is shown in a case recounted by John Borrows, where the “self-proclaimed interpreter of wampum belts,” Stephen Augustine, declared that a belt of wampum was an ancient Mi’kmaq “constitution.”  A rigorous review of the evidence showed that the “belt” was actually a shawl that was created by a Quebec aboriginal group so that a gift could be provided to the Pope.

Sinclair discusses many circumstances that he claims are responsible for the difficulties being faced by aboriginal communities — a violation of treaty rights, the lack of recognition of indigenous languages and changes in aboriginal post-secondary funding. There is no attempt, however, to show how these policy changes have exacerbated aboriginal marginalization.

A number of aboriginal scholars are referred to as engaging in “responsible, ethical, and well-researched scholarship,” and it is argued that “their work proves that all Canadians can partake in, learn from and engage with Indigenous histories, practices and intellectualism to make the spaces we share meaningful, respectful and beneficial for all.” But, once again, Sinclair does not show how this is the case.

There are many instances in the field of Native Studies where critical works are avoided and the unquestioned acceptance of methodologies such as “oral histories” have resulted in erroneous claims being disseminated. The most disturbing refusal to “thoroughly interrogate and question … underlying claims” concerns the denial of the Bering Strait theory in the face of extensive and reputable archaeological, linguistic, and genetic evidence.

Although I have not examined all the authors Sinclair refers to, I am familiar with the work of one Native Studies scholar he praises — Leanne Simpson.  I would be interested in how her work could be considered “well-researched.” One recent article of hers refers to a “nation-to-nation” relationship between fish and human beings on the basis that weirs existed historically — a nonsensical proposition that assumes that all species are “nations” and that the killing of animals constitutes a “relationship.”  Simpson also constantly uses references to her own work to support highly contentious arguments — a practice that is considered to be unscholarly.

In conclusion, Sinclair is right in his demand that scholarship must be rigorous and fair to other points of view. Although Disrobing the Aboriginal Industry could have incorporated additional data, and some errors in such a wide ranging critique are inevitable, we did engage with opposing arguments, and tried to provide evidence for all the claims that were made.  More importantly, unlike many researchers working in the area of aboriginal policy today, we were not paid to produce a particular point of view; the book was produced without the benefit of any outside funding, and so we were not beholden to any interest.

We wrote the book because we thought our ideas were true, not because we were the hired guns of government or an aboriginal organization.  If Sinclair really is interested in critiquing our work — and not just dismissing an inconvenient truth — he should investigate the particular claims that we have made and show how they are inconsistent with the historical evidence that is available.