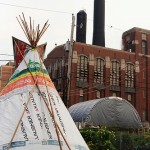 Made refugees from our own territories, we’re hardly ‘immigrants’ to cities

A new study from the Environics Institute highlights the fact that many Aboriginal people who live in cities “have no plans to return to their home reserve,” reports the CBC.

Leaving aside for the moment just how complicated it would be for most of us to even contemplate such a return, I wanted to briefly share a thought that always arises when I encounter this idea that Aboriginal people are ‘new’ to Canada’s cities, implicitly suggesting that “home” reserves are the norm and the urban environment is therefore aberrant for us.

See, I take the long view — the long, long, lonnnnnng view. Fact: many of what are now Canada’s cities were our homes to begin with; that is, before we were booted off our lands and forcibly re-located to — more often than not — areas much less suited for settlement and habitation.

Why? Well, let’s just say non-Aboriginal peoples knew a sweet piece of land when they saw it — and they took it. What a deal: lands already scouted, groomed and modified for optimal human use over decades if not centuries. “Thanks, guys! Now, get lost, will ya?”

In her 2004 talk, “Three Myths about Aboriginals in Cities,” urban geographer Evelyn Peters spoke of “the historical reality” underlying such Aboriginal mobility trends, involuntary or otherwise:

In 1901, only 5.1 percent of Aboriginal people lived in urban areas, and that percentage had only increased to 6.7 percent by 1951. Yet, many Canadian cities emerged in places used by Aboriginal people as gathering spots or settlement areas. When we talk about Aboriginal urbanisation, then, we need to keep in mind that urbanisation patterns are linked to actions that removed Aboriginal people from emerging urban areas. These actions vary from situating or moving reserves away from cities, to enforcing a pass system, to moving Métis communities, to the geographies of government policies.

So, in reality, if we are to speak of Aboriginal ‘immigration’ into cities, let’s try to consider the fact that, for many of us, moving to cities is really just moving back home.