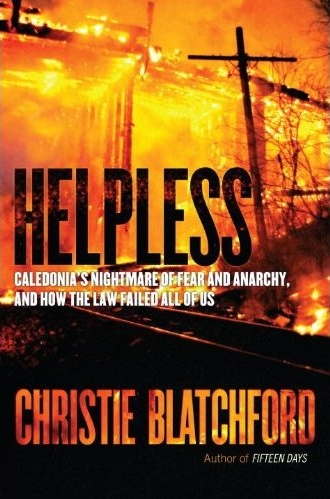 About six months ago, the Globe and Mail‘s Christie Blatchford filed a series of courthouse dispatches from Hamilton, ON regarding the case of a Caledonia, ON family and their $7 million lawsuit against the Ontario government for failing to protect them from “the natives” (of Six Nations) as a result of the Caledonia land conflict.

With column titles like “A reign of terror, a trail of OPP inaction,” “In Caledonia the weak finally have a voice against the strong,” and “A couple terrorized in a ‘war zone’ while police stood by,” Blatchford bludgeoned readers with hyperbole and sensationalism. Her pieces pitted faceless native thugs against a decent, law-abiding, salt-of-the-earth Canadian couple.

This fall, Blatchford turned those articles into a book with the correspondingly obnoxious title, Helpless: Caledonia’s Nightmare of Fear and Anarchy and How the Law Failed All of Us.

I haven’t read Helpless, but if it’s anything like her Globe articles, I already know the story: savages circle the wagons while innocent homesteaders valiantly fight against overwhelming odds when, at the last minute, the cavalry arrives to vanquish the heathen warriors. But in this case, they don’t show up (or so Blatchford claims) and the noble frontiersmen and women suffer all manner of horrors at the hands of their terrorizers.

But this week a group of students at the University of Waterloo decided to interrupt that narrative. They prevented Blatchford from speaking at a scheduled speech on campus, taking the stage and challenging the way she tells this story. The students asserted that the land dispute has been taken out of context by Blatchford’s book and that it fails to examine the history of the situation.

And, in fact, Blatchford has admitted to looking at the conflict through “a very narrow prism.” Ultimately, the students felt that Blatchford should not have a forum to spread views they believe amount to racism.

Indeed, the frustrating aspects of the articles that precipitated the book revolve around the endemic usage of “the natives” — some abstract and homogenous ‘others’ who are all inherently prone to violence — a conclusion arrived at without any in-depth examination of their actual motives.

It seems Blatchford harbours an ongoing ignorance as to the perspectives of those Mohawk or Cayuga activists whom she indicts. But after the protest at the University of Waterloo, perhaps she can finally sympathize with them.