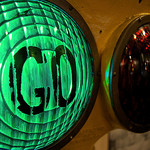 Funny thing about gateways: they can go either way. They can open, and they can close. They can give access to some, yet deny freedom to others.

In Ottawa, the federal government has approved the Northern Gateway pipeline because it prefers to see it as a door that opens to rich economic opportunity, mostly from Asia.

Proponents claim the Bruderheim, AB to Kitimat, BC pipeline will be worth $6.5 billion dollars in construction and jobs. Critics warn the cost of potential environmental damage is immeasurable. Maybe in the billions; possibly ‘just’ millions if it’s a small contained leak or spill. (I mean, how much could it really cost to steam-clean a sea channel used by endangered whales? Assuming any survive the first spill, it’s the least we could do. And think of the upside — all the jobs that kind of work would create! As one Tory minister recently noted, First Nations’ deep understanding of the land would be useful when dealing with oil spills.)

Critics from the opposition parties talk about threats to coastal economies reliant on fishing and tourism. Take heart, folks: worst case scenario, perhaps people will learn to prefer fish sticks manufactured and imported from offshore, as they fly in to tour the breathtakingly beautiful new pipeline. Maybe this is the opening the fish farming trade has been waiting for. Maybe tourists will flood in and pay to see tankers loading up or snap photos of (god forbid) iridescent diluted-bitumen-tainted streams. Five bucks (plus GST) for your very own chance to poke at dead sea otters on the banks before they slide back into the gunk.

Those fly-in camps where you get a little wilderness fishing holiday? We can transform ’em into chemical reagent testing camps, where we look for the right blend that will neutralize toxic water, then restock the petroleum-laden pools with frankenfish. Ahh heck, we’ve already adjusted to mercury, right?

The fight over the Northern Gateway pipeline is zero-sum. For environmentalists, it’s all about hazards and loss. For the federal government, it’s all about gains and cash. The good of the Canadian economy, dammit.

Conservative ministers and lesser MPs huff and puff about an obligation to exploit those resources given to us by God. We’re proud hewers of wood and water, but manufacturers — not so much. The resource stuff is just sitting there, waiting to be taken to market. For the good of Canada. For the good of the world. It’s our duty!

You could make similar arguments about water. Timber. Minerals. All of it must be extracted and sold! The sooner the better. After all, we might even make enough money to finally afford functional environmental protection strategies, making more pipelines through Alberta and elsewhere unnecessary — after this one, I mean.

There’s just one thing: the worrisome contradiction in the seemingly democratic gesture of Ottawa’s approval of the Northern Gateway pipeline. You remember democracy: It’s why, according to all the chest-thumping, purple patriot speechifying, we fight and love our homeland. In defense of freedom and democracy, right? So that the people get their say, yes?

But they have spoken on Northern Gateway, say Ottawa and Enbridge. Their story is that 60 per cent of First Nations along the route have signed on to NGP — but decline to name them.

Yet, even if we were to take them at their far-too-coy word, that’d still leave 40 per cent of First Nations along the route who aren’t so keen on Gateway. Ditto the people of Kitimat and Prince Rupert. And true democracy — the kind of thing politicians like to stand up and brag about — isn’t tyrannical and dictatorial, right? On the contrary: it protects the interests of all.

And, of course, there is that little constitutional matter of Ottawa being obligated to act in the best interests of First Nations.

When word of Ottawa’s Gateway go-ahead came down, Stewart Phillip, Grand Chief of the Union of BC Indian Chiefs, expressed disappointment, then disgust. He has a different interpretation of “best interest.” Philip mentioned several court cases already in the works to fight back. So all the bad blood associated with the approval of the pipeline is guaranteed to stay with us for a while yet.

But then, Chief Phillip only represents a group of chiefs in BC. The Prime Minister supposedly speaks for all of us. Not just Conservatives, but all the chiefs, all the First Nations, plus all of the other people. And majority rules, right? Again, not merely the majority in BC, or the majority of First Nations in BC — we’re talking the majority of all Canadians.

Some of those Canadians work at Enbridge. Sure, it’s just a company. But a damn fine company with immense economic potential. Not just a mere million individuals and hundreds of communities who thrive on fishing and tourism. Think big, people!

Taking it all in, I’m reminded of Mr. Harper’s apology to victims of residential schools where he said:

We now recognize that it was wrong to separate children from rich and vibrant cultures and traditions, that it created a void in many lives and communities, and we apologize for having done this …

We now recognize that, far too often, these institutions gave rise to abuse or neglect and were inadequately controlled, and we apologize for failing to protect you.

I don’t feel protected with this decision. And I don’t know where he plans to spend the money yet. I do know, you can’t eat money. And though you can use it to build housing, it may be challenging from a health — and economic — perspective to live next to a pipeline. (And by the way, what would a pipeline in the ‘hood do to real estate values in Ottawa? Or Calgary?)

It was NDP leader Tom Mulcair who warned that Ottawa’s approval of the Northern Gateway would generate a new level of social unrest across Canada. Chief Phillip said undoubtedly there would be protests. Neither was, I think, advocating social unrest. Both just seem to be recognizing that a line had just been crossed.  And for some people that’s one line too many.

Liberal leader Justin Trudeau says the best response for those who, like him, oppose Gateway (but not Keystone, which Trudeau does support) is to throw Harper and all the ministers in his cabinet who stand behind the decision out of Ottawa in 2015.

Mark it on your calendar.