In Canada, Aboriginal AIDS Awareness Week kicks off today; globally, it’s World AIDS Day. To mark both, we offer this profile of one woman’s life with HIV, sharing her struggles and successes.

For most expectant mothers, sharing the news of their pregnancy is usually welcomed with warm words of congratulations. Not so for Krista Shore.

“I’ve been criticized big time: people definitely think my child is ill, my partner is ill, or the baby that I am carrying is ill,” she explains.

That’s because Shore is one of the growing number of Indigenous people in Canada infected with HIV (Human Immunodeficiency Virus), the virus that causes AIDS (Acquired Immunodeficiency Syndrome). It’s an epidemic that’s struck at the heart of many Aboriginal communities.

Originally from the Peepeekeesis First Nation in Saskatchewan, the 28-year old Cree mother of two now lives with her partner in Regina. Diagnosed in 2006, Shore is now into her fifth year of being HIV-positive.

But as one can imagine, it hasn’t been easy. Shore says she has come a long way from first feeling her life was a death sentence to now feeling tremendously grateful.

And she’s far from alone in her journey. According to the Canadian Aboriginal AIDS Network (CAAN), Aboriginal individuals accounted for 7.5% of the estimated 58,000 Canadians living with HIV in 2005; they made up 23.4% of new HIV infections in 2006. That’s almost three times greater than the non-Aboriginal rate of infection in Canada.

So why are Aboriginal people in Canada so over-represented in the HIV/AIDS epidemic?

“The health determinants impact our people,” explains CAAN CEO Ken Clement. “Things such as poverty, lack of self esteem, residential schools, violence, to drugs and alcohol abuse. Unfortunately, Saskatchewan has been hit the hardest and northern British Columbia, Inuit communities, and northern Manitoba as well.”

“There is never enough being done,” says Clement. “We need … those with HIV to be able to go back to their communities without facing stigma, discrimination or ignorance.

Shore agrees: “That [stigma] takes a toll on the individual when they go in for the proper health care and treatment. They are discriminated against not only from their own people and their community, but by their own family members and health care system.”

They’re issues she knows firsthand. Shore describes an obstetrician nurse-in-training who advised her to undergo tubal sterilization, so she doesn’t have any more children.

“At the time I was diagnosed, my children were wards of the government,” she says. “I was a mother of two children at that time. Not being educated, I thought it was a death sentence.”

Indeed, it might come as a surprise to many that women can and do deliver healthy, HIV-negative babies despite being infected themselves.

“I am in a serodiscordant relationship, meaning I am HIV-positive and my partner is HIV-negative, so I had a good opportunity to be able to have a HIV-negative child,” explains Shore. “When a woman has access to universal care and treatment and support, a woman is capable and able to lessen the risk of transmission to 1 per cent.”

Shore says that with thorough testing and monitoring, prescribed antiretroviral drugs, and stringent protocols during delivery, it is possible for a mother with HIV to give birth to a HIV-negative child.

Today, Shore is a little over 6 months pregnant; in less than 10 weeks, she’ll give birth to what will be her second child since being diagnosed.

Somehow, this busy full-time mom manages to find time to also advocate on behalf of the All Nations Hope Network and CAAN, dedicating herself to helping pregnant HIV-positive Aboriginal women. She wants to help them to feel safe and supported throughout their pregnancy and to give them the best fighting chance possible.

“There needs to be a connection between the service providers that can provide the proper education, but also with school boards, child family services and all others that come into play in dealing with our people, especially when dealing with our high-risk people,” she says.

As for the stigma, Shore works tirelessly to combat society’s disapproval and attitudes to HIV and AIDS.

“People need to take the time to see that not one of us is invisible. That’s where people need to really separate how they treat people, that I am a human being, I am not a human doing.” 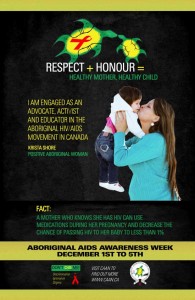 To that end, Shore is part of CAAN’s new campaign, “Respect + Honor = Healthy Mother, Healthy Child” — a message she feels strongly about.

Despite the criticisms sometimes thrown her way for her choices, Shore says she would much rather focus on her work and, most importantly, her children.

“I look at my little child and she is nothing but a true blessing, a true picture of health.”

UPDATE:  Regina Leader Post reports that Saskatchewan now has the highest HIV/AIDS rate in Canada, with many of those cases being Aboriginal people.

One thought on “Krista Shore: A ‘Positive’ Aboriginal Woman”