In the Spirit of Crazy Dance: Why rounddancing is revolutionary

A few years ago, I wrote a column for some newspaper, long-since-forgotten and probably no longer around. (I hate to think that I might’ve had anything to do with its demise, but you never know.) Anyway, my article was a critique about canned demonstrations put on by so many Indian organizations (as they were known then). The demonstrations didn’t work. I said so.

They might’ve worked once, I remember writing, but they had since become boring and oh-so-predictable, more like funeral marches. The organizations had to press their staff into the streets to carry placards, pre-printed for every occasion, just to make it look like a decent demo. I called it “Dial-a-Demo,” complete with instant indignation — just add chanting.

The news media went to cover these events out of a sense of duty rather than genuine interest, curiosity or thirst for a story. Formulaic demonstrations begat formulaic reporting. Each story began and ended the same way. Most of their stories still do. It’s a familiar formula and not much different from the way TV reporters cover powwows. Permit me to share its elements according to its predictable sequence.

First, cue the drums and chanting.

(What’s this got to do with the issue, you ask? Nothing. This is TV news; incomprehension is the name of the game.

Next, roll the disembodied reporter’s voice in monotone over pictures. He says a number of NDNs aren’t happy.

(We’re not sure why, not in any human terms that we viewers might understand, anyway. That doesn’t seem to matter to the reporter. As a result, we — the viewers — don’t much care either.)

Zoom in to unsmiling, dour-looking faces of people holding placards with familiar slogans.

(Where have we seen that one before?)

Switch to shot of drummers holding one hand over an ear, as they chant at the top of their lungs while beating the crap out of a big drum with the other hand.

(Meanwhile, anything the disembodied off-camera reporter says is lost because we viewers are straining to listen to the drummers. Luckily, it doesn’t matter, because the reporter isn’t saying anything important or new.)

Insert clip of a chief. The chief says he’s against something.

(BOR-ing. I mean, c’mon: dude doesn’t even have one of those neat-o Plains headdresses, the ones that scream ‘Hollywood.’ What is he, Mi’kmaq from Nova Scotia, maybe, or Innu from northern Quebec? Ah, who the hell cares about details like that, anyway? They’re all basically abodigitals. Seen one, seen ’em all, right?)

Moving on… insert some more placards and chanting.

(Gotta love those action shots that have nothing to do with the issue. But, who cares: this is TV, people. Can’t do a story about Indians unless we show Indians with drums and chanting. No drums and no chanting means no story: a reporter actually told me this once.)

Insert a clip of a government official or politician saying there’s no need to worry because the NDNs won’t be getting what they want.

(The official or politician doesn’t have to say anything that makes sense. As reporters, you don’t need to care. You just need a clip from him or her to provide “balance.” And by balance, that means the amount of face-time, not the quality of ideas.)

Now, let’s go out with more pictures and sound of chanting and drumming. And let’s have more of those unsmiling faces holding placards.

(Geez… The way they’re carrying on, you’d almost think these demonstrators didn’t want to be there.)

We face two choices for the possible ending of this mini-epic. Either we have a reporter’s monotonous voice atop some background sound and pictures of chanting Indians, or, we can use an on-camera reporter’s ‘standup,’ telling us that no one got hurt, and nothing was settled.

(Either way, us viewers can come back from the kitchen with that beer now because this story is finally over. Whew! We are outta here.)

And so it went, demo after demo. Back when I was assigned to cover yet another anti-poop-and-scoop demonstration, I remember thinking this must feel much the same as those reporters sent out to cover Indian protests. Begin with dog barking, rollicking in park. Clip of owner saying dog poop is nature’s way of fertilizing grass. More dogs at play. Clip of city official saying stoop-and-scoop by-law is city’s way of making doggy depressed, so perhaps dog whisperer’s business might benefit.  End with shots of distressed-looking mutt having a poop.

“Give me strength,” I’d pray to myself as we zoomed out of the bat cave on yet another mission to inform and entertain Canada’s viewing public, “if I have to do one more of these paint-by-numbers stories, I swear I’m gonna go postal.” But, as I worked for the Queen’s Corp, I managed to delude myself that I was “On Her Majesty’s Service” with each and every mission. 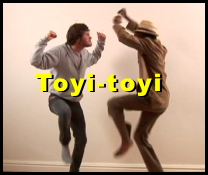 Then came enlightenment, and it came when I learned how to toyi-toyi in South Africa. In that instant, I learned that demonstrations weren’t for politicians, blah-blah-blah speeches, or organizations pushing this or that issue. I learned that real demonstrations are about people and spirit. For blacks in the latter stages of apartheid, toyi-toying was their way of showing their disdain for the South African authorities. That’s right: by dancing. Sometimes they danced with pretend weapons (small sticks instead of real spears) in the face of overwhelming armed force. Can you imagine anything less threatening, yet more unsettling, to squads of heavily-armed riot police and soldiers than a crowd of smiling, singing, unarmed people who refuse to be afraid? Sometimes, the authorities weren’t even a teeny-tiny bit amused. (See the toyi-toyi ‘in action’ for yourself here.)

Why was the toyi-toyi so effective?  Because it said in ways that words can’t that apartheid was doomed. The majority of people might have been dispossessed, reduced to abject poverty, but their spirit wasn’t broken. Laughing, smiling people dancing the toyi-toyi told apartheid that its days were numbered. The toyi-toyi said that lies told by the South African government were no longer believable, certainly not among its majority Black and colored populations, but also for a growing number of people who benefited from apartheid.

So the next time you come across an Idle No More round dance in person, take a good, long look around: notice all the smiles you see and all the laughter you hear. Then think about the message this sends, not only to a federal government that has become all-too-scripted, but to millions of Canadian all too ready for their own chance to smile and laugh.

4 thoughts on “In the Spirit of Crazy Dance: Why rounddancing is revolutionary”