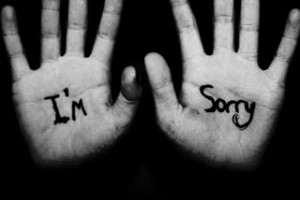 Sorry is NOT the hardest word, contrary to conventional thinking.

In relation to the treatment of children sent by Canada to its Indian residential schools, it’s been said often and by a significant number of people: the Prime Minister, the Anglican Church, the United Church, some Catholics — though not quite the Pope.

But the distance between word and action is long, as noted in an earlier writeup in MI. “Sorry” can and does end up simply being a stand-in for “NOW will you go away?”

So just when you’ve gotten into the groove of dismissing those kinds of apologies, along comes University of Manitoba Vice-Chancellor David Barnard with something that sounds completely different.

Here’s a guy apologising before the Truth and Reconciliation Commission for the fact that his institution failed to challenge the forced assimilation of Indigenous people into the colonizing culture, when it had a self-proclaimed responsibility to do so.

It’s an admission that bystanders too have obligations.  And that doing nothing is as bad as letting others do the wrong thing.

Who apologises for that? At any time in history?

Mr. Barnard concludes that having spoken the truth in his apology, the next step is reconciliation. It is the next step. Barnard’s kind of apology makes that easier.

2 thoughts on “How to Apologise”