An Ink-stained Response to ‘Disrobing the Aboriginal Industry’ (Pt. 1)

The following piece originally appeared in somewhat different forms in guest editorials/commentaries for Kanata (Vol. 1) and Canadian Literature: A Quarterly of Criticism and Review in its Winter 2009 (#203) issue. 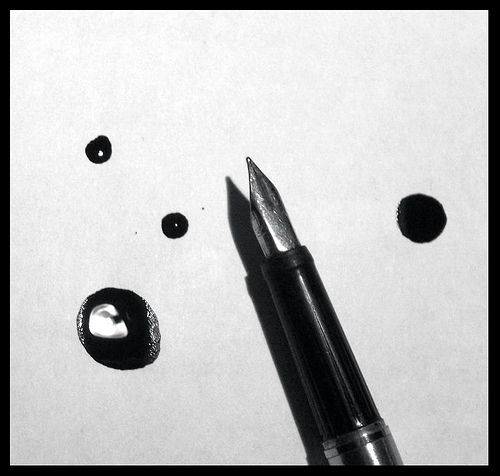 I was first forced in grade two to use them, in handwriting class.

My teacher said, “We use pencils and erasers because we’re just learning, and practice makes perfect. This way, we can get rid of mistakes and keep the page clean.”

I loved pens, in all their ink-filled permanency.  Black.  Blue.  Red.  Even though I was told not to, every chance I got I filled my scribbler with blots, strokes and smudges.  Let the page be messy, I thought.  Full of my beautiful, consistent, every-few-seconds mistakes. My errors made my occasional successes that much sweeter.

Now that I’m grown up, I continue to see pencils and erasers everywhere. And though people are still learning — and hopefully all of this practice is leading somewhere (I’ve given up on perfection) — erasing and keeping the page clean has resulted in some dangerous consequences.

For one example, take Frances Widdowson and Albert Howard’s recently-published Disrobing the Aboriginal Industry: The Deception Behind Indigenous Cultural Preservation.  In it, the authors attempt to resurrect widely discredited and blatantly Eurocentric anthropological theories of human “cultural evolution” — first suggested by Edward Tylor (1832-1917) and “refined” by Lewis Henry Morgan (1818-1881) — to argue along progressivist lines that Native societies were “savage,” “neolithic” and “barbaric,” whereas Europeans were at a more complex and advanced “stage of cultural development.” This development gap is evidenced in Aboriginal peoples not having “writing,” the “alphabet,” and “complex government institutions and legal systems” at first contact.

According to Widdowson and Howard, it is the embracing of these “undeveloped” cultures, still steeped in “obsolete features,” that results in today’s Aboriginal peoples having “undisciplined work habits, tribal forms of political identification, animistic beliefs, and difficulties in developing abstract reasoning.” In their parameters — where European historical “development” is the linchpin of all value, complexity, and “civilization” — Widdowson and Howard of course ignore the fact that, while Native communities never had European-based alphabets and governing structures, they did have intricate signification systems (see: Anishinaabeg petroglyphs, Mayan codices, or Iroquois wampum), multidimensional governing institutions (like the Five — later Six — Nations Confederacy, clans/totems, and the “red” and “white” Muskogee Creek town councils), and diverse legal systems (embedded in such principles as reciprocity, mediation, and responsibility), worthy and meritorious on their own terms. [1]

If Widdowson and Howard were simply practicing their Eurocentrism in their own scribblers, they should be allowed to think and write whatever they want. But instead they attempt to influence the rest of us by employing their ‘findings’ to make baffling governmental recommendations, devise a reductionist history, and “solve aboriginal problems.” Although they claim to be attacking the “Aboriginal Industry” (lawyers, consultants, anthropologists and Native peoples themselves) and “a self-serving agenda,” it is clear the authors are most interested in influencing Canadian government policy.

In subsequent chapters, the authors:

We hope someday you’ll join us…

Everyone, Widdowson and Howard argue, must get beyond the “distortions” that “aboriginal problems were caused by the destruction of viable and ‘sovereign nations’ during European conquest” and heed “objective” research (like theirs) that “proves” that Aboriginal cultures remain “undeveloped” and have little worth in today’s world. They celebrate and defend “the residential school system” as one  institution that necessarily facilitated a “civilizing” process where “components of [a] relatively simple culture” were “discarded” and a “more complex” one can enter. [3]

The “fact” is, the authors claim,

“obliterating” various traditions is essential to human survival. Conservation of obsolete customs deters development, and cultural evolution is the process that overcomes these obstacles. … [T]he “loss” of many cultural attributes is necessary for humans to thrive as a species in an increasingly interconnected and complex global system.

Then, in perhaps the most ironic moment of the book, Widdowson and Howard invoke John Lennon’s “Imagine.”[4]

The authors share their “dream” of a time when Native values based in “tribalism,” “kinship relations” and “difference” are eliminated so “we can become a global tribe and the ‘world can live as one,’” a ‘tribute’ that just might have Mr. Lennon spinning in his grave.

Continue on to Part 2

1. For reputable and detailed research on this, I recommend Charles Mann’s 1491: New Revelations of the Americas Before Columbus, or Arthur Ray’s I Have Lived Here Since the World Began: An Illustrated History of Canada’s Native People as excellent starting points.

2. This is only a minor sampling of these authors’ grandiose statements and recommendations. For more, see chapters entitled “Land Claims: Dreaming Aboriginal Economic Development,” “Self-Government: An Inherent Right to Tribal Dictatorships,” “Justice: Rewarding Friends and Punishing Enemies” and “Traditional Knowledge: Listening to the Silence.”

3. Widdowson and Howard claim that when Native peoples and their advocates label the “missionaries’ efforts as ‘genocide’” this “obscures” the reality that residential schools were important movements in Native “cultural development.” Although they admit that “the missionaries deserve criticism for the methods they employed in attempting to bring about this transition,” they claim that “[m]any of the activities held as destructive to aboriginal peoples — the teaching of English, the discouraging of animistic superstitions, and encouraging of self-discipline — were positive measures intended to overcome the social isolation and economic dependency that was (and continues to be) so debilitating to the native population.”

4. The use of the song by Widdowson and Howard is ironic on several levels. “Imagine,” which appeared as the title track on John Lennon’s 1971 number-one album, is widely known as holding an anti-war, anti-violence, anti-religious, and anti-capitalistic message, which doesn’t quite mesh with the authors’ Eurocentric, assimilationist agenda, nor the interest in such violent policies as residential schools. In addition, the fact that historically the song was written in response and resistance to the Vietnam Conflict — a war devised out of nationalistic, patriotic, and ideological conformity, not to mention the deaths of 6 million people and a long-standing occupation by Americans — and experiences that virtually mirror Aboriginal peoples’ in North America, seems lost on the authors. Or, perhaps Widdowson and Howard are literally interested in Lennon’s intentions, as envisioned and embodied in his music video of “Imagine.” It features a cowboy-dressed John Lennon walking through a forest, holding hands with a stoic and Pocahontas-looking Yoko Ono, when the two discover a beautiful house, enter a room completely painted white, and a timid Ono sits mutely while Lennon sings (ending only when he decides to kiss her).

10 thoughts on “An Ink-stained Response to ‘Disrobing the Aboriginal Industry’ (Pt. 1)”