Some Inflated Thoughts About Treaty Payments 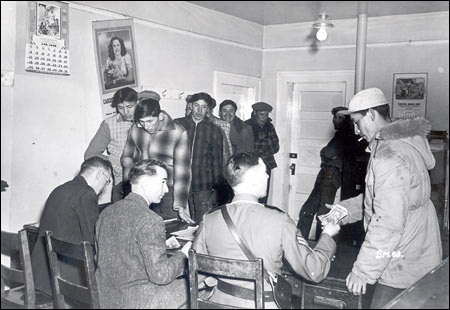 I sent away for my “treaty money” the other day.

Apparently, you can do that now. Growing up in Manitoba, treaty money was usually collected in person at “Treaty Days,” which commemorated the occasion of your First Nation signing its bilateral treaty with the Crown. Many treaty communities still host their own Days.

It was at these celebrations that treaty money — a whole $5 per person (don’t spend it all in one place now) — was distributed.  I remember a Mountie, complete with Red Serge, would shake your hand after you accepted your yearly treaty payment.  All very exciting for a wee kid on the rez.

Who gets treaty payments?  Well, according to Indian and Northern Affairs Canada (INAC), who have been delegated the task of paying this money out,

Treaty annuity payments are paid annually on a national basis to registered Indians who [hold membership in] bands that have signed historic treaties with the Crown.

That would be me.

Living in a major city, I almost forgot about treaty money altogether. That is, until I came across this form on INAC’s website. So as I sit patiently waiting for what I can only assume will be a $5 cheque with Chuck Strahl‘s signature to come in the mail, I’m left wondering, “Y’know, after all these years, with inflation and whatnot, why haven’t they increased the amount of treaty money we get?”

That’s a question Jean Allard has thought long and hard about.  In his controversial article, “Big Bear’s Treaty: The Road to Freedom,” the now-retired Metis politician argued that treaty payments should be ‘modernized,’ that is, adjusted to reflect today’s dollar values. By calculating the amount of goods, services, land, etc. that one could buy with $5 back when most of the treaties were signed, you could generate an equivalent dollar figure for current payments.

By Allard’s math, that would work out to annual treaty payments of $3,600 a year for each and every First Nations man, woman and child. A family of four would thus receive a total treaty annuity of $14,400.

Here’s where the controversy comes in: Allard argues further that these adjusted-for-inflation treaty payments should be distributed directly to individuals — bypassing First Nations governments and even INAC altogether. Allard maintains it’s the only way to true self-sufficiency.

And as I budget out what I’m going to buy with my $5 (a candy bar, pop and maybe a newspaper come to mind), Allard’s suggestion doesn’t seem like such a bad idea.

25 thoughts on “Some Inflated Thoughts About Treaty Payments”