The new (media) world: reflecting on early Aboriginal adoption of the web

Gawd, I love the Internet sometimes.

Years ago, when I was working in diversity, I did a quick search of web sites that had content by and for the main target groups: Women, People with Disabilities, Visible Minorities, and Aboriginal peoples.

(Yes, I’m that old. And, yes, that’s what they called us way back then. So are you gonna listen to the story or what?!)

Anyway, I scrounged about and found some interesting things. Back then, long before Facebook or Twitter, in those dark days of early versions of text-based web browsers and dial-up, I discovered that there were more web sites created by Aboriginal peoples than the other three diversity target groups combined. 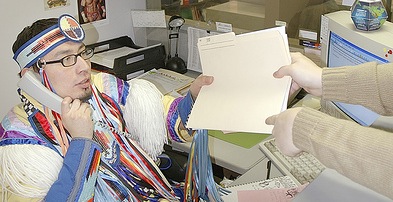 I collected their website addresses and spent a lot of time confirming their existence and viability. Yep, they worked. No one else seemed to think this was cool. I did. Still do.

I’m constantly reminded how neat the whole thing is when I come across pages like Indigenous Peoples: Issues and Resources, which is just an encyclopedia full of stuff about Onkhwehhonhweh (aka ‘the people’ in something other than this foreign language you’re reading). I was amazed even back then about how valuable a tool these new technologies can be for shrinking the world, bringing the lives and issues of brothers and sisters on the other side of the world that much closer, and reminding me how much I have to learn.

On This Day: In 1887 a law was passed in the United States that prohibited the use of any Native American language in schools. The policy had a devastating effect as it prevented many younger Native people from learning and speaking their language. Despite US efforts to assimilate Native people, the policy was ultimately a failure, and currently many Native tribes are working hard on language revitalization programs.

Ah, yes: assimilation. Did the U.S. learn from this failure? Did other countries, like Canada, just follow its example and step into that same pile of bull as the U.S.? And have things changed much since, domestically or with their international adventures?

One thought on “The new (media) world: reflecting on early Aboriginal adoption of the web”