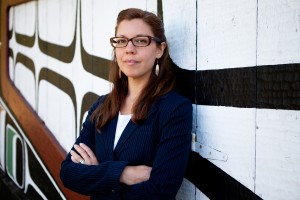 Most days, Sarah Hunt can be found reading and drinking coffee in Lkwungen territories, also known as Victoria BC. She has 15 years’ experience as a community-based researcher, writer and educator around issues of violence, justice, resistance, gender and sexuality. She is also involved in the development of Indigenous methodologies and research ethics, as central to the resurgence of Indigenous knowledge, cultural practices and ways of life. Her doctoral research, for which she received a Governor General’s Gold Medal, investigated the relationship between law and violence in ongoing neocolonial relations in BC, asking how violence gains visibility through Indigenous and Canadian socio-legal discourse and action. Sarah is Kwagiulth, of the Kwakwaka’wakw Nation, and is also of Ukrainian and English ancestry.

Sarah on Twitter
Sarah on Academia.edu
Sarah at TEDx Victoria